What You Need to Know about Surge Protectors before Hurricane Season

What You Need to Know about Surge Protectors before Hurricane Season

With hurricane season bearing down on the Gulf Coast, it’s easy to forget about the hazards big storms create with regard to power outages and electrical surges. Home maintenance steps before or during hurricane season should include installing surge protectors for sensitive electronics, home entertainment centers and HVAC equipment, including central air conditioners and heat pumps. 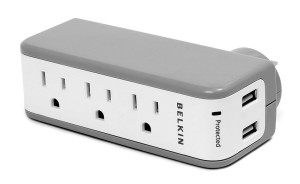 A typical home experiences more than 300 potentially damaging power surges annually. Electrical surges and spikes are powerful bursts of electricity that can damage electrical and electronic equipment; they’re caused either by lightning, disruptions and surges in the regional electrical grid, or power spikes within the home. The first two causes often accompany tropical storms and hurricanes.

Internal surges, which are by far most common, usually can be traced directly to appliances in the home. These include A/C compressors and refrigeration motors that draw substantial power when they kick on.

A good surge protector will protect your home from incoming power spikes and surges; so-called “bounce surges” or spikes from appliances in the home; and electrical conduction from lightning in the area. When an appliance or electronic device is plugged into a surge protector, the surge in voltage gets diverted to a grounded component in the surge protector.

You won’t get surge protection from a standard electrical outlet. Power strips with surge protection (not all of them offer this benefit) and single-outlet, or appliance surge protectors, protect against power surges and spikes in the home.

There’s probably no better reason for effective surge protection than your home’s central air conditioning, which is probably the most expensive system in your home. Dedicated surge protectors for A/Cs and other HVAC equipment are readily available, and can be installed quickly by a trusted A/C technician. You can be assured of protection that in some cases will accommodate up to 100,000 amps of current during an electrical surge.

To further discuss the home maintenance benefits of surge protection in your Metro Houston area home, or other ways to protect your HVAC equipment during hurricane season, please contact us at Bradbury Brothers Heating & Air Conditioning.

About the Author: Jacki Bradbury